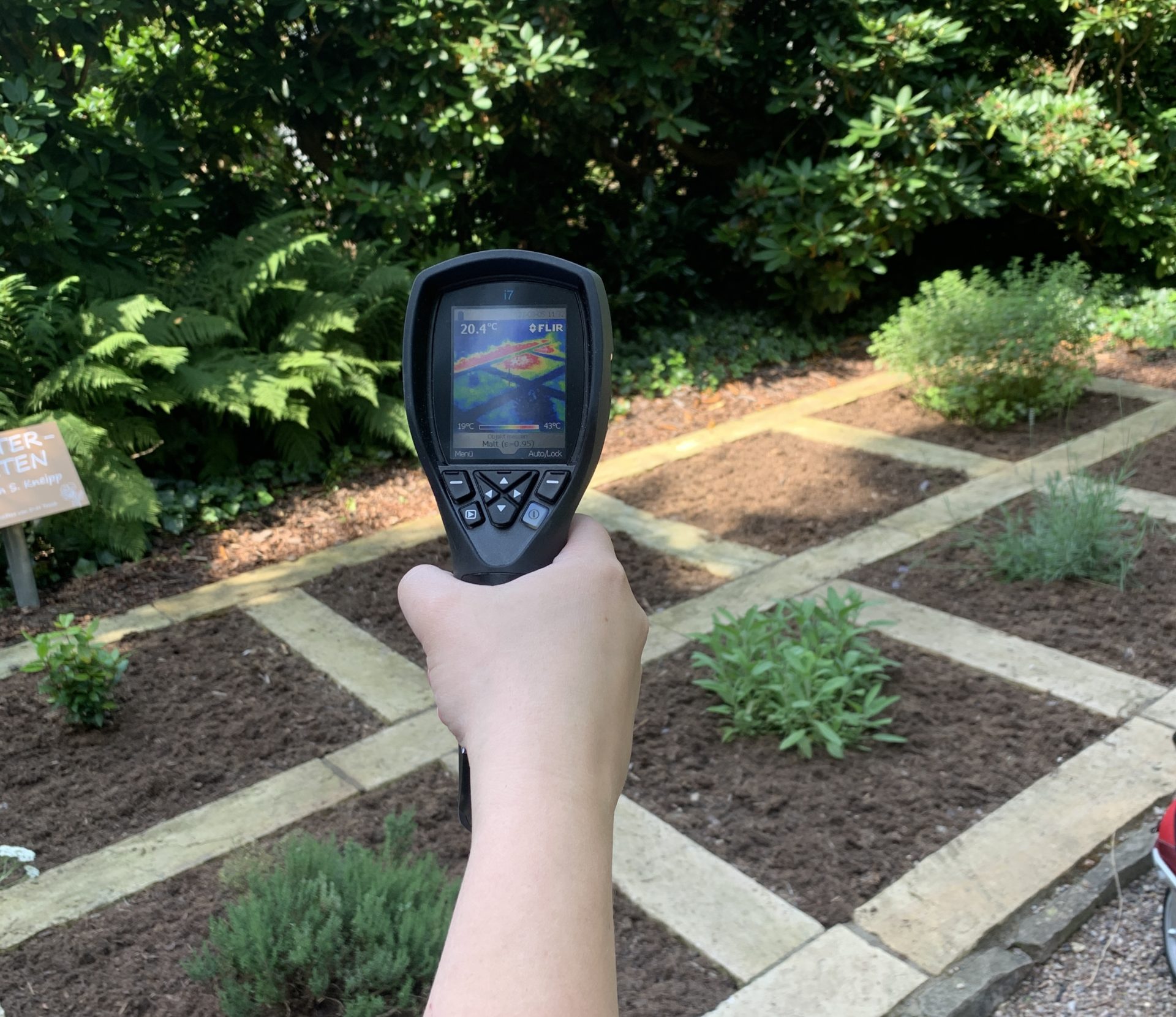 The idea of a climate impact walk for citizens was developed in the workshops on climate resilient urban and settlement design (Klimaresiliente Stadt- und Siedlungsgestaltung) within the Evolving Regions project. The aim is to inform interested citizens in the district of Minden-Lübbecke about the project and to make it possible to experience climate change adaptation in everyday life. Without further ado, the climate protection management of the Minden-Lübbecke district administration decided to initiate a climate impact walk together with the energy consulting of the NRW consumer center in Minden.

For the district of Minden-Lübbecke, a temperature increase of the near-surface air temperature of 0.3°C to 4.8°C is predicted by the end of the 21st century – depending on the scenario – in relation to the reference period 1971 to 2000 (cf. Helmholtz-Zentrum Hereon, Climate Service Center Germany). Extreme weather events are becoming more frequent and more intense as a result of climate change. In addition to greenhouse gas reduction measures, it is important to adapt to the consequences of climate change in the best possible way.

Climate Impact Walks were held in Minden on two Thursdays (July 29, 2021 and August 5, 2021). Together, they walked a route with stops in the botanical garden, in a new development area, and in a parking lot. During the walk, participants conducted small experiments. Infrared measuring devices were used to record the surface temperatures of various surfaces. Sealed, dark areas were found to have higher temperatures than light or vegetated sections. From this, direct conclusions could be drawn for the climate-resilient design of the residential environment. Bright surfaces have a higher albedo (a higher reflectivity) than dark surfaces, which absorb radiation. Therefore, the design should use the lightest possible materials. Plants cool the air through the effect of evaporative cooling. The same applies to water surfaces in the city, which citizens found out by taking measurements when passing a pond in the green area. Heavy rain events were also a topic. Through a simple experiment in which two participants poured out a liter of water at the same time, it became clear that when water is poured onto a forest floor, it percolates immediately, whereas on sealed surfaces, surface runoff occurs and follows the slope.

In the residential area, there was discussion about building insulation and green roof and façade options. The county currently provides funding for this purpose for residential and commercial properties: https://www.minden-luebbecke.de/Projekte/Klimaschutz-und-Energie.

The climate impact walk was a great success and can be implemented as part of Evolving Regions on a wide variety of topics and for different target groups. Cooperation with schools and/or universities is being considered, for example.